Trending Troubles
Contribution to GTI Forum Which Future Are We Living In?


Twenty years after the publication of Great Transition, and twenty-five after the delineation of the six scenarios in Branch Points, the hopes for a change in course remain unfulfilled. We are stuck in a Market Forces world. Policy Reform has made progress, with examples like the international agreement on the Sustainable Development Goals, the continuation of the Intergovernmental Panel on Climate Change, and a number of international agreements that aimed to reduce greenhouse gas (GHG) emissions, alleviate poverty, etc. But these have proven neither sufficient nor effective enough. Yes, global poverty has been falling until recently, but inequality has increased dramatically. And GHG emissions are still increasing globally with corresponding changes in climate, biodiversity is being lost, the possibility of nuclear war has reappeared, and other signals indicate that we are not in a Policy Reform trajectory of gradual, ordered progress.

As was true twenty years ago, local patches and seeds of almost all scenarios are evident in the present, including Fortress World, Breakdown, and Eco-communalism (but, as I see it, not the New Paradigm). They are perhaps more noticeable now because of the exacerbation of contrasts. But none are dominant today. And the unfolding of the New Paradigm scenario seems farther away than we had thought two decades ago.

This is my perception of where we are. But regarding where we are heading, the view becomes blurrier; some of the new trends or driving forces that have emerged over the past two decades augur well for the future, whereas others look quite ominous.

I see the major changes in the driving forces that occurred since the original publications of the Global Scenario Group as the following, with the originally defined trends summarized and shown in bold and signiﬁcant changes during the last two decades in italics.1

1. Economic and geopolitical forces: the end of the Cold War, a universal expansion of the capitalistic system, and an acceleration of globalization

1.1. The evolution of the unipolar world that emerged after the end of the Cold War into a bipolar world with the ascent of China, and probably to a multipolar (oligopolar) world later. Today, the US, China, and Japan are the three biggest economies (in that order), and by 2050, the ranking will likely be China, the US, and India (obviously, within the Conventional World assumption).

1.2. The global economic crisis triggered by the COVID pandemic and reinforced by the war in Ukraine (of unknown duration and consequences)

2. Social: in particular, poverty and national and international inequity

2.1. Signiﬁcant reduction of global poverty during most of the period

2.2. Unprecedented increase of inequality within and between countries

3.1. Increasing number of refugees from armed conﬂicts and environmental change

3.2. Rising xenophobia in Europe and other parts of the aﬄuent world

4.1. An earlier manifestation of the impacts of climate change than predicted, with a rapidly closing window of opportunity to avoid its worst eﬀects

4.2. The surpassing of a number of environmental “planetary boundaries” 2

5. Technological: the continuation of the technological revolution, the expansion of global information and communications, and the private control of technological innovation and diﬀusion and of its beneﬁts

6. Global governance: the continued proliferation of non-governmental organizations, the strengthening of civil society, and the reinvigoration of the United Nations system

6.1. International agreement on the UN Sustainable Development Goals established in 2015

6.2. Emergence and spread of international terrorism

6.3. Weakening of the globalization process and relative reinforcing of nationalistic politics

6.4 Expansion of populist political movements in many countries 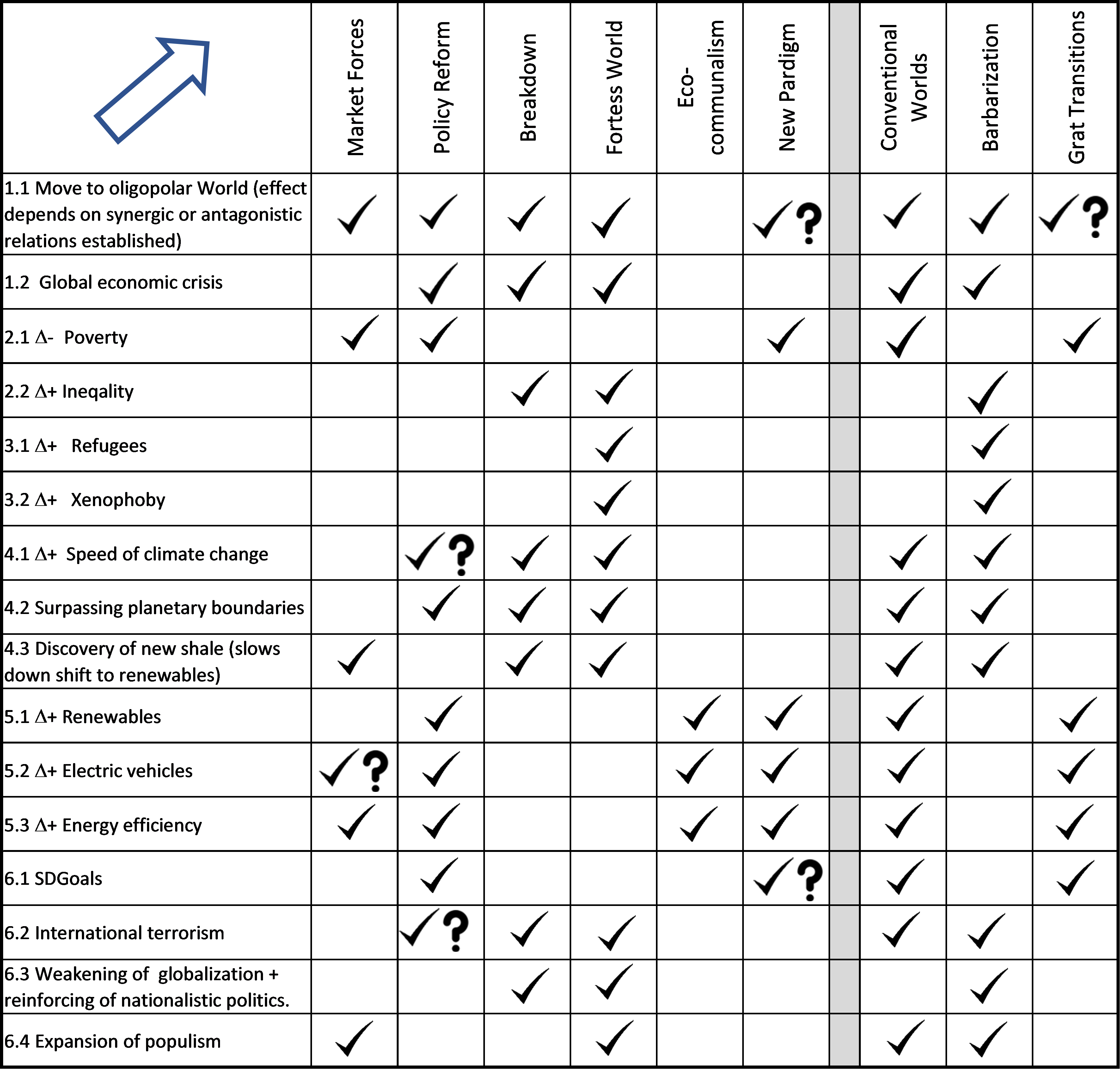 Considering all of such trends, which scenarios do we seem to be approaching (or moving away from)? The future does not “come”; it is built by the social actors interacting with other social and ecological processes within the physical and thermodynamic constraints of the world. The accumulation of trends in one or two directions can operate as early warning signals of the need to steer the changes towards desirable futures.

The new trends, viewed collectively, favor the Barbarization scenarios. To a lesser degree, they could favor the Policy Reform scenario, although this depends on an effective and timely reaction by policymakers that is not evident today. Very few drivers seem to be compatible with the Eco-communalism scenario, and even fewer, the New Paradigm scenario. Lastly, although some trends favor the continuation of the Market Forces scenario, it is the most unlikely scenario by the end of the century given its fundamental unsustainability.

As Paul Raskin rightly pointed out in his opening reflections, the preconditions for a systemic movement have evolved, but the critical global movement we need has not yet materialized. Today, we do not see the systemic movement we thought was necessary and possible, but we are much nearer than two decades ago to an unwanted systemic restructuring of the Earth System (abrupt climatic change, ecosystems loss, revival of the risk of nuclear war). And great uncertainty prevails.

This situation could provide the impulse for the needed global will to change course. If not, or if we are too late, a systemic reorganization (most likely catastrophic) will occur well before the end of this century, and it is impossible to anticipate which line of futures will prevail in the aftermath.

Gilberto Gallopín is an independent scholar based in Argentina and Associate Fellow at Tellus Institute who has published widely on a range of environmental and development issues.

Which Future Are We Living In?