How Do We Get There? The Problem of Action

In our time of unprecedented interdependence and existential risk, we face a common predicament and an uncertain destiny. As the global quandary deepens and awareness spreads, the conviction that root-and-branch social change is needed to circumvent perils and seize opportunities draws more and more of us. Reaching a flourishing future requires the revitalization of the basis of planetary civilization, a Great Transition in culture and institutions.1

The vision of a better world beckons, but how do we get there? Although there are no easy answers, this much seems axiomatic: a systemic social force is needed to drive a systemic planetary shift. But what shape might such a force take, and how can we best nurture it?

Since its inception in 2003, GTI has taken up the question of historic agency, building on the work of its predecessor, the Global Scenario Group. We have had episodic exchanges on the critical role to be played by a popular global movement (a “global citizens movement”) in the Great Transition story, and some of us have experimented with building collaborative campaigns to foster it.2

But it’s been a while. The times change, and so do we. More than ever, we need stronger answers to the still-burning question of action. This note summarizes core GTI ideas developed to date, in the hope of stimulating fresh thought and debate, and perhaps new initiatives.3

The conceptual framework for addressing this challenge rests on four pillars that address four associated questions: Where are we? Where are we going? Where do we want to go? How do we get there? These questions urge—in ascending degree of difficulty—critique of the existing order, analytic exploration of alternative global scenarios, normative visions of desirable outcomes, and collective action for shaping social evolution.

The good news is that solid progress is being made on the first three questions. Mainstream natural science and heterodox social science continue to clarify the character of the emerging world system, along with the underlying drivers of the multiple crises we face. Global scenario analysts are illuminating the contrasting worlds that might emerge from the branch point of the turbulent present. Social visionaries are sketching the contours of possible outcomes compatible with a global civilization of enriched lives, human solidarity, renewed communities, and a resilient biosphere.

A full exploration of this expanding body of work is beyond this note, but a summary in GTI’s terminology can anchor the discussion.

Where are we? We have entered the Planetary Phase of Civilization, a profound historical shift binding people, places, and the wider community of life into a single, encompassing social-ecological system.

Where are we going? The future remains indeterminate and contested, but what is clear is that adhering to Conventional Worlds modes of development is risking, indeed already facilitating, an abrupt descent into some form of Barbarization scenario.

Where do we want to go? Great Transition scenarios envision redirection of the global trajectory toward a socially equitable, culturally enriched, and ecologically resilient planetary civilization.

The bad news is the slow headway made in finding adequate answers to the most intractable question: How do we get there? For all the important work now underway, we have collectively fallen short of nurturing a systemic change agent matched to the task of planetary transformation. The search is still on for this critical actor missing from the global stage.

A few broad propositions have been fundamental to the GTI discourse on social agency. Although provisional and subject to revision, they provide a reference framework for maintaining coherence across the diverse perspectives and political passions that a discussion of transformative action is bound to prompt.

The challenge is at once plural and unified. The Great Transition of which we speak entails a systemic shift that manifests across a vast mosaic of themes, issues, and places. This sparkling heterogeneity urges an ecumenical change strategy that validates plural points of leverage under a canopy of unity. Taken together, the many forms of progressive action already underway from local to global scales could well be the harbinger of a systemic social agency.

Contemporary efforts are necessary but not sufficient. As never before, we need movements for justice, peace, and environment; global change science; education and awareness-building campaigns; and local sustainability efforts. Still, fragmented, dispersed actions cannot overcome the systemic deterioration that overwhelms piecemeal gains painstakingly won here and there. None alone can be a cure for structural social-ecological dysfunction, nor together can they add up to one. The many parts of a whole movement do not a holistic movement make.

A systemic transformation will take a systemic movement. The search for a social actor fit for purpose leads us to posit a vast cultural and political rising, a global movement attuned to the overarching project of shaping a thriving planetary future. Child of the Planetary Phase, it would stand as an explicit and proactive advocate for ushering in a form of planetary civilization fit for the twenty-first century.4 Like all consequential social movements, it would assert power culturally, by shaping ideas and behavior; tactically, through actions that disrupt the status quo; and strategically, by building institutions for sustained political influence.

A social movement is not an organization. A social movement has multiple moving parts. According to Webster’s Dictionary, it can be defined as a “heterogeneous group of people or organizations tending toward or favoring a generalized common goal.” Thus, for example, civil rights, labor, and national movements have comprised multiple organizations, groups, and individuals working toward shared social goals in myriad cultural and political ways. A global movement for a Great Transition would evolve as a complex social ecology of formal and informal associations focusing on a thousand issues and approaches, operating from local to global levels and aligned by broadly shared values and vision.

A shared collective identity would overlay diversity. Such a diverse, polycentric movement would work on all fronts within an embracing project of transformation. As with all social movements, adherents would be bound together by a collective identity, in this case a sense of connectedness within a global community. They will be proto-citizens of the whole planet, the proto-global entity with no name, which I refer to as Earthland.5 Thus, the political and cultural rising that expresses this larger identity and promise would be, by whatever name, a “global citizens movement” (GCM).

The barriers to success are high. We need to acknowledge and confront the valid fears that darken hopes for the future. The fledgling GCM confronts the resistance of entrenched power structures, the counterforce of regressive ideologies, the drag of cultural inertia, and the jolts of macro-crises. Perhaps the biggest obstacle of all is the despair paralyzing so many potential comrades.

The game is still on. The only response to counter such barriers and pitfalls is to double down, buoyed by the one certainty about the future: surprise. Historian Howard Zinn reminds us: “We forget how often we have been astonished by the sudden crumbling of institutions, by extraordinary changes in people’s thoughts, by unexpected eruptions of rebellion against tyrannies, by the quick collapse of systems of power that seemed invincible.”6 With cards to play and still a chance to win the long game, it’s too soon to fold.

The time is propitious. Objective and subjective conditions—the imperative to act in the face of business-as-usual perils and the desire for a convivial Earth community—are maturing. Historical possibility and human intention together underpin the prospects for a globalized mass movement: a popular front for Earthland. This movement grows ever more ready to be born, yet for now remains latent.

New initiatives are vital. Can the GCM crystallize at sufficient speed and scale? How can we best act to help mobilize a popular force attuned to the Great Transition challenge? If it is true that fortune smiles on the prepared, the odds of a favorable social pivot depend on preparing the ideological and organizational terrain now, before more and greater systemic crises strike. The urgent meta-challenge is to weave an integrated praxis as a cocoon for a mass GCM. As with past social transitions, as the time for change approaches, small proactive actions can carry large consequences. We need to consider new organizing efforts explicitly oriented toward nurturing a plural, united global movement.

The ends must animate the means. To earn legitimacy, efficacious initiatives need to ensure that the core principles underpinning its future vision infuse its mode of operation for getting there. In particular, movement campaigns need to find ways of balancing unity and diversity, of abjuring the extremes of top-down vanguardism and bottom-up spontaneity. Engaging a rapidly changing world and embracing new waves of participants requires an adaptive strategy and spirit of co-creation. Not least, we need to cultivate a politics of trust that tolerates proximate differences in order to foster ultimate solidarity.

To summarize the core thesis, the coalescence of a powerful GCM would be the critical social innovation for driving a Great Transition. By forging a globalized community of fate, the Planetary Phase makes this rise historically plausible. We see precursors in the proliferating movements, organizations, and campaigns for a more just, resilient, and fulfilling world. The central challenge becomes how to embrace this diversity while bringing the nascent meta-movement fully to life.

Of course, not all will see it that way. The search for a systemic change agent will likely not engage optimists confident that the system will self-correct, or, at the other extreme, pessimists despairing of change that can counter apocalyptic premonitions. Nor will it draw fellow travelers committed to reformist tweaks, or comrades certain they hold the key to the conundrum of transformation.

Let the rest of us—the concerned, hopeful, committed, and humble—revisit the challenge of collective action with fresh eyes. The frame of reference laid out here urges a renewed search for answers t the pressing question of transformative action: How can we envision a systemic global movement, and what initiatives can hasten its coalescence? 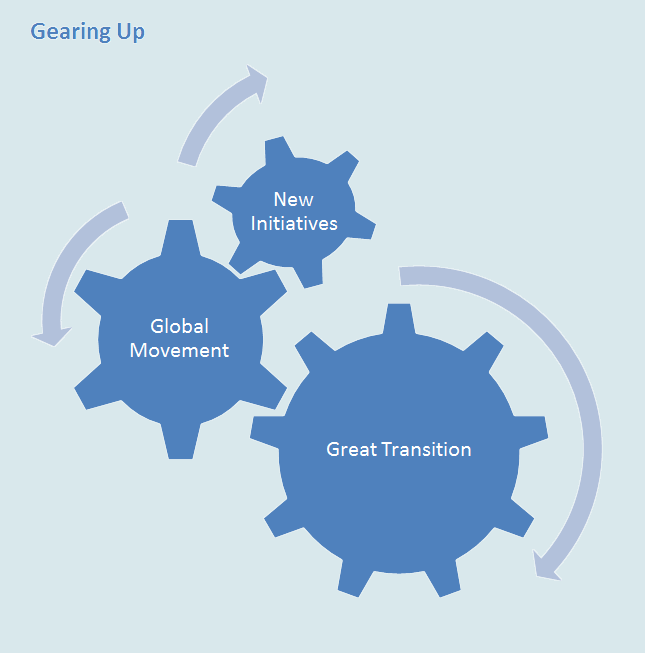 1. See Paul Raskin, Tariq Banuri, Gilberto Gallopín, Al Hammond, Pablo Gutman, Robert Kates, and Rob Swart, Great Transition: The Promise and Lure of the Times Ahead (Boston: Tellus Institute, 2002), http://greattransition.org/gt-essay. Explanatory videos and other introductory materials can be found at www.greattransition.org.
2. Noteworthy here was The Widening Circle (TWC) that from 2010 to 2012 brought together GTI, Pachamama Alliance, Earth Charter, and a number of other groups and individuals. TWC emerged from discussions at an assembly (“The Synergizer”) with the aim of carrying forward the ideas introduced in my “Imagine All the People” (Boston: Tellus Institute, 2010), http://www.greattransition.org/archives/perspectives/Perspective_Imagine_All_the_People.pdf. Imagine was republished in Development and Kosmos (2011) and translated into Spanish, French, and German.
3. These ideas are explicated in Paul Raskin, Journey to Earthland: The Great Transition to Planetary Civilization (Boston: Tellus Institute, 2016), http://www.greattransition.org/publication/journey-to-earthland.
4. See Journey, 59–70, for a discussion of the historic preconditions and broad contours of a GCM.
5. Tariq Banuri, GTI co-founder, came up with this useful neologism.
6. Howard Zinn, “The Optimism of Uncertainty,” in The Impossible Will Take a Little While: A Citizen's Guide to Hope in a Time of Fear, ed. Paul Rogat Loeb (New York: Basic Books, 2004).

Paul Raskin is the founding president of the Tellus Institute and director of the Great Transition Initiative. His books include Journey to Earthland: The Great Transition to Planetary Civilization. He holds a PhD in Theoretical Physics.

Cite as Paul Raskin, "How Do We Get There? The Problem of Action," Great Transition Initiative (December 2017), http://greattransition.org/publication/how-do-we-get-there.

The Problem of Action

The Great Transition to Planetary Civilization

GTI Director Paul Raskin charts a path from our dire global moment to a flourishing future.

Read more and get a copy