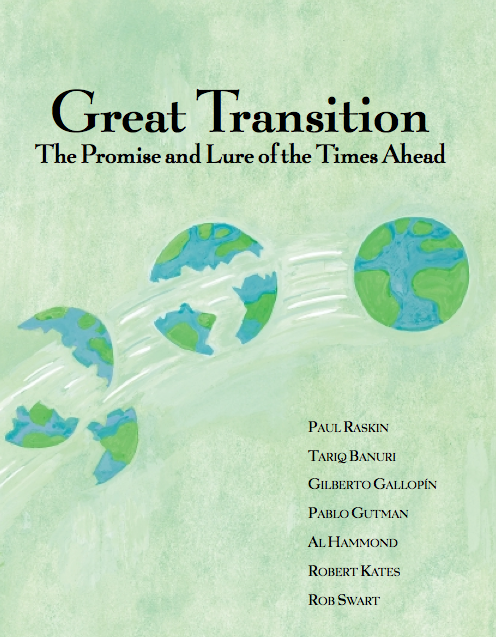 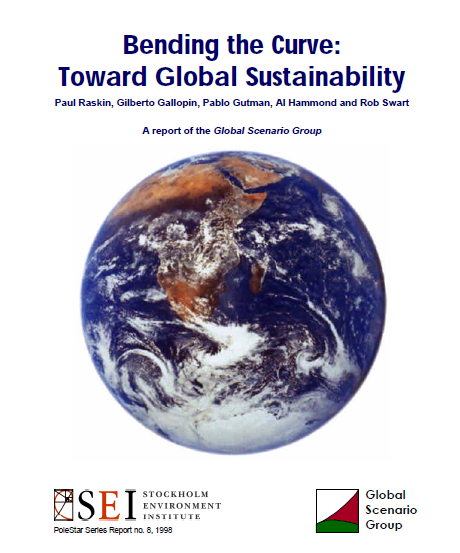 Bending the Curve: Toward Global Sustainability
Paul Raskin, Gilberto Gallopín, Pablo Gutman, Al Hammond, Rob Swart
November 1998
This paper analyzes the prospects for sustainability within the confines of Conventional Worlds scenarios. The shift to more sustainable forms of development must at least begin at this level, although we will likely need more fundamental social changes to complete the transition to a sustainable global society. The paper introduces social and environmental targets as well as strategic policies for reaching them. It shows both the great potential for progress and the daunting challenges within a growth-driven development paradigm.

Contours of a Resilient Global Future
Michael Gerst, Paul Raskin, Johan Rockström
December 2013
Humanity confronts a daunting double challenge in the twenty-first century: meeting widely-held aspirations for equitable human development while preserving the biophysical integrity of Earth systems. Extant scientific attempts to quantify futures that address these sustainability challenges are often not comprehensive across environmental and social drivers of global change, or rely on quantification methods that largely exclude deep social, cultural, economic, and technological shifts, leading to a constrained set of possibilities. This article combines three previously separate streams of inquiry—scenario analysis, planetary boundaries, and targets for human development—to show that there are plausible, diverse scenarios that remain within Earth’s safe bio-physical operating space and achieve a variety of development targets. However, dramatic social and technological changes are required to avert the social-ecological risks of a conventional development trajectory.

The Century Ahead: Searching for Sustainability
Paul Raskin, Richard Rosen, Christi Electris
August 2010
This study explores possible pathways to sustainability by considering, in quantitative form, four contrasting scenarios for the twenty-first century. The analysis reveals vividly the risks of conventional development approaches and the real danger of socio-ecological descent into a future of diminished human and ecological well-being. Nonetheless, the paper underscores that a Great Transition scenario—turning toward a civilization of enhanced human well-being and environmental resilience—remains an option, and it identifies a suite of changes in strategic policies and human values for getting there.

The Sustainability Transition: Beyond Conventional Development
Paul Raskin, Michael Chadwick, Tim Jackson, Gerald Leach
February 1996
Conventional development wisdom generally assumes the long-term continuity of dominant institutions, along with the expansion of resource-intensive consumption and production patterns in industrialized countries and their gradual extension to developing countries. However, the growth orientation of conventional development strategies and the resource-intensive lifestyles produce risks and unacceptable deterioration of the biosphere, as well as social and economic instability. The limitations of the conventional development paradigm suggest the beginnings of an outline for a strategic agenda for sustainability.
Strategies for Change

Planetary Praxis: On Rhyming Hope and History
Paul Raskin
November 2009
Amidst growing environmental, economic, and social instability, there remains hope for a transition to a tolerant, just, and ecologically resilient global civilization. However, such a transition is feasible only if human thought and action rise to embrace one human family on one integral planet. The search is on for a compelling planetary praxis, an evolving theory and practice to guide the journey and forge the path to our common future. This essay identifies a “global citizens movement” as the critical actor for the transition, arguing that the conditions of the twenty-first century will make such a cultural and political formation increasingly feasible and suggesting strategic actions for accelerating its crystallization.

GTI Proposal
Tariq Banuri, Steve Bernow, Paul Raskin
August 2003
This founding proposal of the Great Transition Initiative laid out GTI’s original aims: to involve an expanding group of engaged thinkers and thoughtful activists in an exploration of ways to envision and crystallize a transition to a future of hope. The document describes the motivation for GTI and proposes tasks for launching the process. It was shaped by the comments of scores of GTI endorsers worldwide, representing the concerns of North and South, environment and justice, peace and liberty, and reflecting the diversity that is the bedrock of the Initiative.