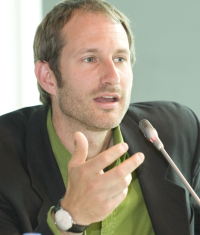 Tilman Santarius is a scientific author who has written on topics such as climate policy, world trade, sustainable economics, and global justice. He is the co-author of the book Fair Future: Limited Resources, Security, and Global Justice (2007) and the Heinrich Böll Foundation report “Slow Trade – Sound Farming: A Multilateral Framework for Sustainable Markets in Agriculture” (2007). From 2001 to 2009, he served as Senior Research Fellow at the Wuppertal Institute for Climate, Environment and Energy. From 2009 to 2011, he was Head of International Climate and Energy Policy at the Heinrich Böll Foundation. Since 2007, he has served as member of the board of the environment and development NGO Germanwatch. Since 2011, he has been working on a PhD project on the “rebound effect” at the University of Kassel. During the 2013/2014 academic year, he was a Visiting Scholar at the University of California, Berkeley.