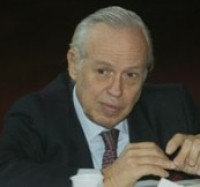 Roberto Savio is the founder of the Inter Press Service (IPS) news agency, a nonprofit cooperative of journalists and experts specializing in global communications and development issues. Since 1973, he has been a consultant on information and communication issues for many developing countries, designing the National Information Systems Network (ASIN) for Latin America and the Caribbean, and the UNESCO-supported Latin American Features Service (ALASEI). He has served on the International Council of the World Social Forum since its inception in 2001, and is the Chairman of the Board of the Alliance for a New Humanity. He is the co-founder of Media Watch International, co-founder of the Internet service Othernews, and president of Indoamerica, an Argentine education NGO.